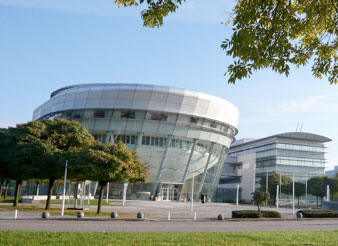 The research of our team aims to clarify the complex role of poly(ADP-ribosyl)ation in the cellular processes controlling genome integrity and tumorigenesis. Previous work of the team has focused on dissecting the properties of the enzymes catalyzing the synthesis of poly(ADP-ribose) (PAR) in response to DNA damage, the poly(ADP-ribose) polymerases PARP1 and PARP2, and the enzyme degrading PAR, known as poly(ADP-ribose) glycohydrolase (PARG).

We defined PARP1 as a sensor of DNA strand breaks, playing essential functions in the spatial and temporal organization of their repair through the local synthesis of PAR and recruitment of DNA repair enzymes at the site of the lesion. Its inhibition is currently used in clinical trials to potentialize the cytotoxic action of antitumoral drugs and radiation therapy or to target repair deficient cancers (BRCAmut). PARP2 has also been shown to contribute to genome integrity. By combining biochemical studies and characterization of PARP1 and PARP2-deficient cellular and animal models, we uncovered redundant functions of both proteins in DNA repair and more specific activities in the regulation of transcription, chromatin organization and cell differentiation. Finally, we identified prime functions of PARG to prevent detrimental accumulation of PAR upon irradiation and prolonged replication stress.

These last years, we undertook the biochemical and functional characterization of novel PARP members, PARP3 and PARP9. While PARP9 is described as a novel actor in stress-induced double-strand break repair, our PARP9 knockout mouse model does not show obvious defects in the repair of programmed double-strand breaks. We found that PARP3 plays important functions in cell response to double-strand breaks, mitotic progression, epithelial-mesenchymal transition and stemness in breast cancer.

Our challenge today is to further dissect the biochemical and biological properties of PARP3 in double-strand break repair and tumorigenesis in breast cancer, glioblastoma and pancreas cancer. We also explore its contribution in cell differentiation events during neurogenesis and muscle regeneration. We develop these projects combining biochemistry, cellular approaches and molecular biology with the generation and functional characterization of loss-of-function cellular models (with a particular interest for stem cells) and animal models (Cripsr/Cas 9, knockout mouse models).